Top Posters In This Topic

The Consumer Products Safety Commission recommends a maximum hot tub temperature of 104 degrees for private hot tubs. These strict guidelines are for your safety. Temperatures of 106 degrees or higher 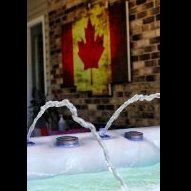 I'm with @RDspaguy on this.

If you have a balboa spa pack that uses thermistors, like most do, the post about adding a 1k resistor into the sensor wires for both sensors is a really easy effective way to do it.